When a political class produces a ruling class incompetent, the focus tends to move on communication, and in particular in that communication that serves to hide the shortcomings related to incompetence. This is the case of the “strategy” regarding the League’s vote to Von der Leyen.

You have to understand one thing: all ‘Italian will not go any economic commissioner weight. That Count if they make a reason, the Spaniards are ahead in guaduatoria, ditto for the Dutch and Portuguese. There is no Italian party that has leading positions in parties that express the majority in ‘Europarliament, and the parties of the Italian majority are confined in groups in the parliament in Brussels have less than zero.

That said, the problem of the League communicators and M5S was: how do we hide the catastrophic incompetence that led at this point? When it happens that invariably there will be no economic weight Commissioner given to Italy, some would say that we were not able to get away with spider hole.

First things first: Von der Layen has not been elected with fewer votes because it is weak. He was elected with fewer votes because the parties were protesting against the failure of the logic of SpitzenKandidat, a “tradition” which had allowed the Socialists to hope for their candidate (Timmermans). It is a logic that, before the parliamentary elections the dell’europarlamento parties should indicate who will be their candidate for the EU Commission, which gives Parliament a certain power. In the case of Von der Leyen the rule has been violated, and mainly for this has had a few votes. But in normal practice, the Von der Leyen will have many more votes. M5S was not the balance .

After all, if he failed the Von der Leyen would win Timmermans. Since he did not win Timmermans Now Holland is running for the “leading economic commissioner,” however. But M5S voted for the Von der Leyen mainly because they knew it was their arch Timmermans and avowed enemy. As they know little of the Von der Leyen, the illusion of having elected a better candidate. When they realize how treacherous and Machiavellian dissimulatrice is this woman, and how adept at falling in feet – in comparison with the best strategists of Casaleggio are amateurs – will curse this choice. But their ignorance of German policy has saved them.

However, if the Von der Leyen says you’re his enemy, you’re his enemy. And it is very capable to turn over to you the weapons that point on, as they have learned well the staffs that the Germans’ They have known. Every scandal they started to mow the minister claimed the careers of some military noble, and Von der Leyen has remained in place. And in his speech he said to be hard enemy of populists. It means you do not even understand which side will come the shots. And with a dissimulatrice like that contrast, it must be understood literally.

But this is about the future. Let’s get back to the point:

The communication strategy is simple: they did the math and figured out that to avoid Timmermans head of the EU, (which would have made it clear that the European elections to have won the Left) were not needed the votes of the League . And if the league had voted against the Von der Leyen, would provide the excuse for the failure in the allocation of Commissioners .

the reverse of the League vote needed to build a narrative. According to this narrative, the lack of a European Commissioner weight is not due to the incompetence of the government, but to an alleged retaliation for failure to vote. In short, the usual pseudo-patriotic victimhood.

And to hide this fact, intend to use the usual fascist strategy: victimhood. 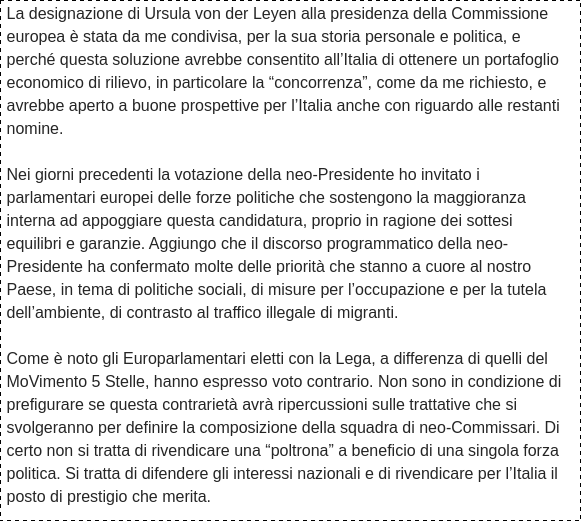 Notice how Conte says “would allow”, using a formula that does not guarantee certainty, as if it were a broken agreement. “Would open good prospects.” And then it takes “are not in a position to foresee whether this opposition will have an impact.” But to be sure, will tell you who’s to blame.

And that’s what you can expect from an incompetent political class lacking the results fall back on communication.

Maybe that’s why your young men, now, are paid in “visibility” ‘. If with apologies you fail to pay us the bills, go ahead.

As I have already written, the mass media are an obstacle that stands between us and reality, in or ...